From Decolonization to Indigenization: the Road to Equality

Home/Events, Newsletters/From Decolonization to Indigenization: the Road to Equality
Previous Next

From Decolonization to Indigenization: the Road to Equality

A version of this presentation was given September 2, 2019 by ICOM Canada Board member, Michèle Rivet, C.M. at the 25th ICOM General Assembly in Kyoto, Japan. Michèle’s presentation was part of the “Decolonisation and Restitution: Moving towards a more holistic perspective and relational approach” panel (Session 1) moderated by Afşin Altayli (ICOM Secretariat) and Tonya Nelson (Chair, ICOM UK). The presentation spanned two rounds of talks.

From Decolonization to Indigenization: The Road to Equality

I would like to thank my ICOM Canada colleagues for their contributions, and to Marie Lalonde, Board chair, and the others attending here today.

In 2016, Indigenous peoples in Canada constituted over 1.6 million people, or 4.9 percent of the population, located mainly in Central and Western Canada. Canadian museums are in the process of moving from Decolonization towards Indigenization.

Decolonization restores the Indigenous worldview, culture, and traditional ways of life, replacing Western interpretations of history with Indigenous perspectives. Indigenization, on the other hand, recognizes the validity of Indigenous worldviews, knowledge and perspectives. It incorporates Indigenous ways of knowing and doing in museums, the best global example being between the Māori and the Pākehā peoples in New Zealand at the Te Papa Tongarewa Museum.

Canadians have for years established policies and practices on restitution and repatriation with museums, including the following significant events:

Following the 1988 Lubicon Cree boycott of “The Spirit Sings” exhibition during the Calgary Olympic Games, a working group was created with Assembly of First Nations members and the Canadian Museums Association. In 1992, the working group submitted a report titled Turning the Page: Forging New Partnerships between Museums and First Nations. It recommended increased participation of Aboriginal people in the interpretation of their culture and history, better access to museum collections for Aboriginal peoples, and the repatriation of sacred objects and human remains contained in museum collections.

Canada has also been involved in the development of the United Nations Declaration on the Rights of Indigenous Peoples. In November 2010, Canada issued a Statement of Support endorsing the Declaration’s principles. Since May 2016, Canada has been a full supporter of the declaration, without qualifications.

The Truth and Reconciliation Commission of Canada released its report in 2015, calling the Residential Schools that affected more than 150,000 Aboriginal children “cultural genocide.” The Commission includes several Calls to Action involving museums, including Recommendation 67 that calls on

“the Federal Government to provide funding to the Canadian Museums Association to undertake, in collaboration with Aboriginal peoples, a national review of museum policies and best practices to determine the level of compliance with the United Nations Declaration on the Rights of Indigenous Peoples and to make recommendations”.

Most recently, in April 2019, the Royal BC Museum and the Haida Gwaii Museum released the Indigenous Repatriation Handbook.

A Few Examples of Museum Initiatives:

Several trends towards indigenization, decolonization and reconciliation are becoming common among Canadian museums. Some select trends include:

Decolonization rests on rebuilding relationships, establishing partnerships, and doing things “in a good way,” as many Elders say. The core principles are: Respect, Reciprocity, and Interconnectedness.

Respect means honouring and respecting other living beings, giving full importance to tradition in the 21st Century. Examples of this can be found in: 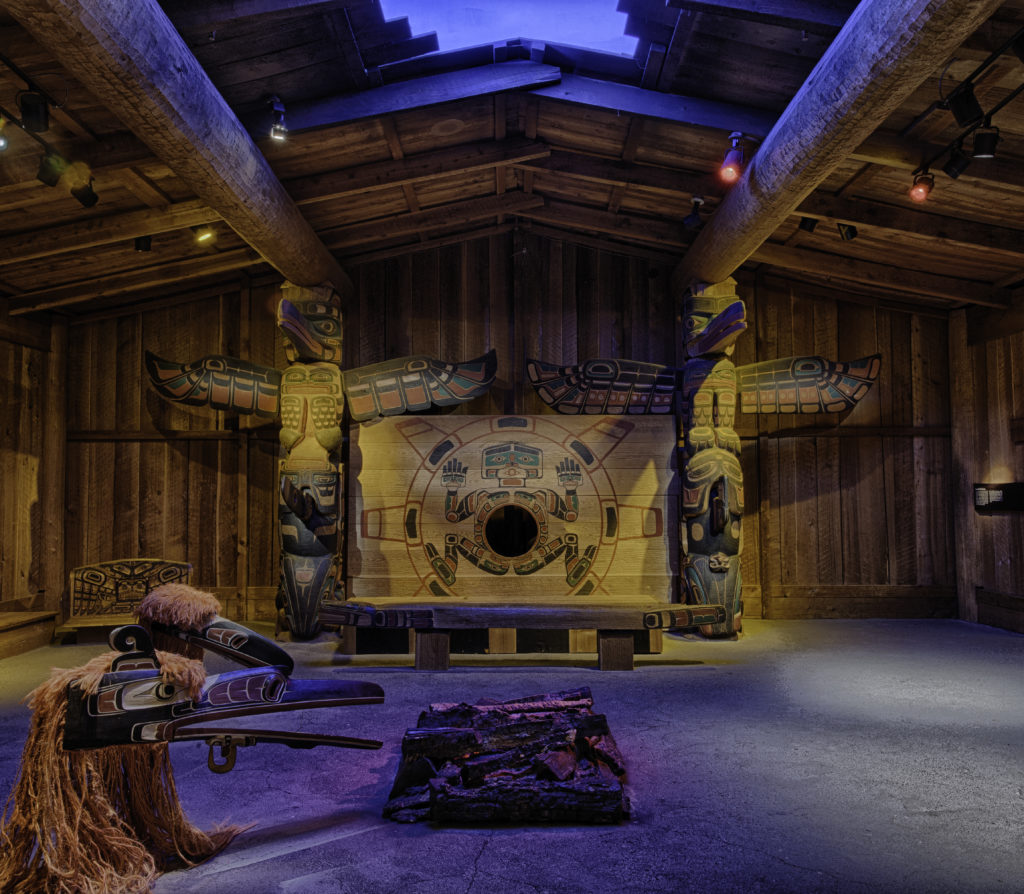 Jonathan Hunt House, First Peoples’ Gallery, Royal BC Museum. The house is both a museum installation and a real, actual ceremonial house. (Image courtesy of the Royal BC Museum and Archives)

Wearing our Identity, The First Peoples Collection permanent exhibition at the McCord Museum (Montreal), which includes works by contemporary Aboriginal artists who explore the notion of identity. Selected twice each year by an Aboriginal guest artist and curator, the works are integrated into the exhibition. (Image © Marilyn Aitken, McCord Museum) 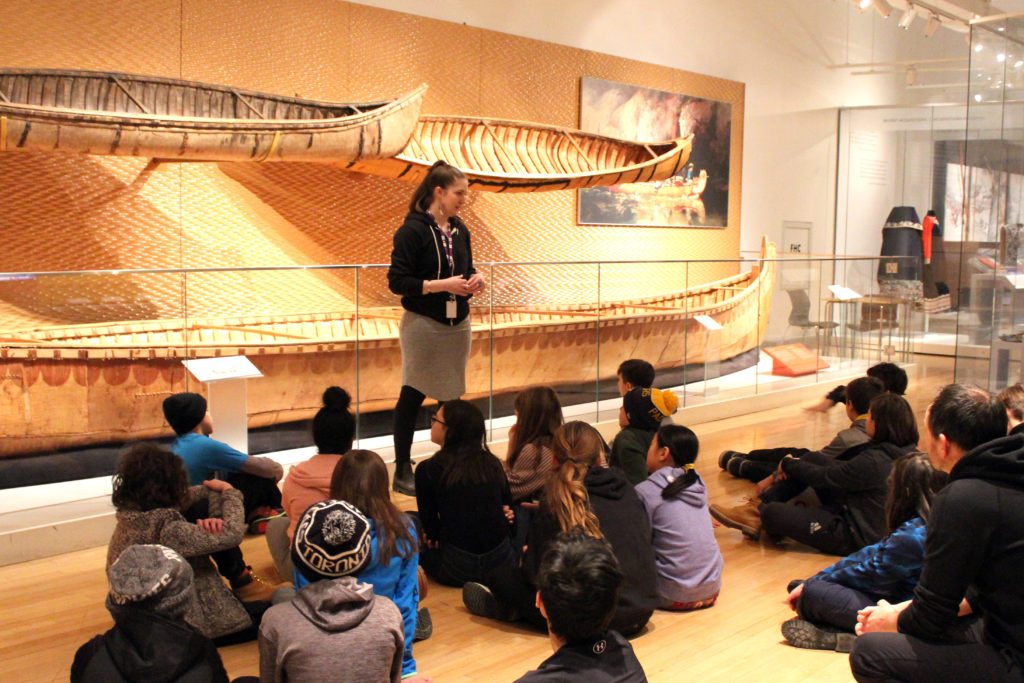 Reciprocity is about the rights and obligations for people toward each other. For example, stewardship agreements between museums and Indigenous communities to ensure the care of artefacts through treaty negotiations, an important example being the Nisga’a Treaty of 2000. At the Canadian Museum of History, the 2017 opening of the Canadian History Hall marked the first time Indigenous and non-Indigenous histories were woven together in one expansive history of Canada. 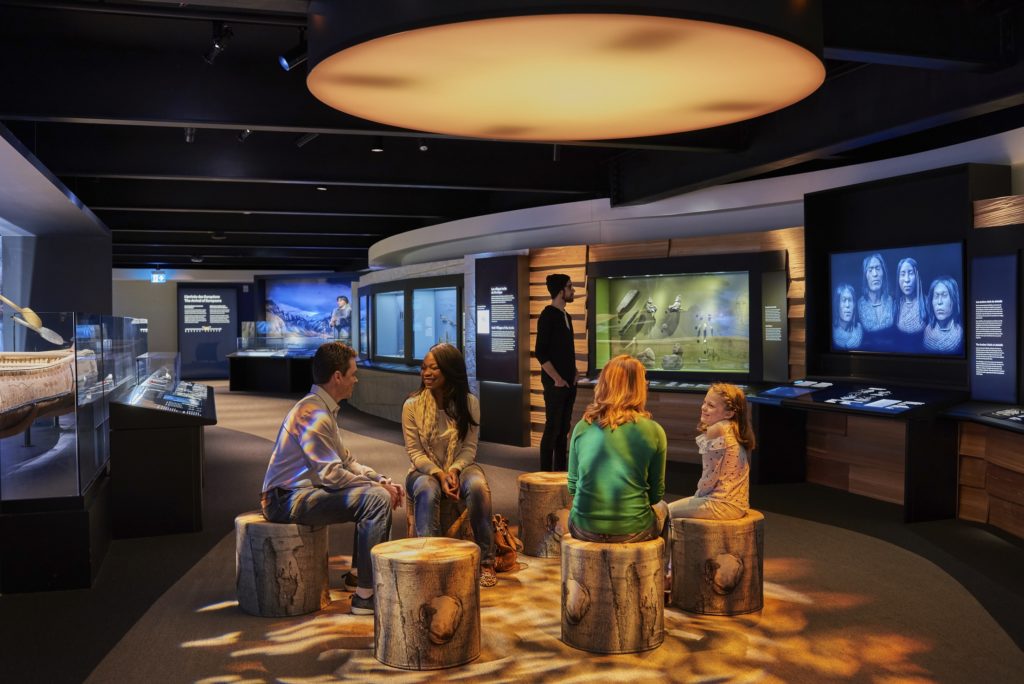 On the right-side screen are four faces. In 2016 and 2017, the shishalh Nation (British Columbia) and the Canadian Museum of History collaborated on the development of this exhibition module for the Canadian History Hall showing shishalh ancestors. Two modules were constructed: one for CHH, the other for installation at Tems Swiya, the museum located on shishalh land. The images are facial reconstructions of 4,000-year-old ancestors based on ancestral remains. (Image courtesy of Canadian Museum of History, IMG2018-0032-0094-Dm)

The Challenges: Towards Indigenization

The third Decolonization principle, interconnectedness, leads us to challenges that museums are still facing today.

Interconnectedness recognizes that rights of individuals and of the collective are intermeshed, that everything and everyone has purpose and that each is worthy of respect. Decolonization and Indigenization is about centring Indigenous ways of knowing and understanding the world and relationships, and making sure we respect those ways in all interactions with Indigenous peoples.

From the Canadian Museum for Human Rights, stories of Indigenous and human rights violations emphasize a shared responsibility for the past and for the present, to empower visitors to understand the past and to take action to change the future through the principles of interconnectedness. (Image courtesy of Aaron Cohen/Canadian Museum for Human Rights)

Indigenization means that museums are expected to achieve, according to Mariam Clavir, a Canadian conservationist emerita, a “’both/and’ model in bringing together First Nations and museum conservation perspectives on preservation.”[1] In other words, “museums have to become meeting places for ideas about the relationship of objects to history, historiography and the organization of knowledge in society.”[2]

Decolonization dismantles systems of thoughts that place the straight white person as standard,[3] it is an overhauling of the entire system. I suggest that indigenization is about hybridity and the “establishment of a culture of shared authority and power.”[4]

As we can imagine, there are still many challenges, including:

To conclude, indigenization is about hybridity. It is much more than consultation, it is about sharing decision-making in full equality with First Nations, in every aspect of their life with the museum. Sharing decision-making is part of museums’ fiduciary duty to the society they serve. Canadian society is looking towards equality for all Canadians in this way. The road to equality…